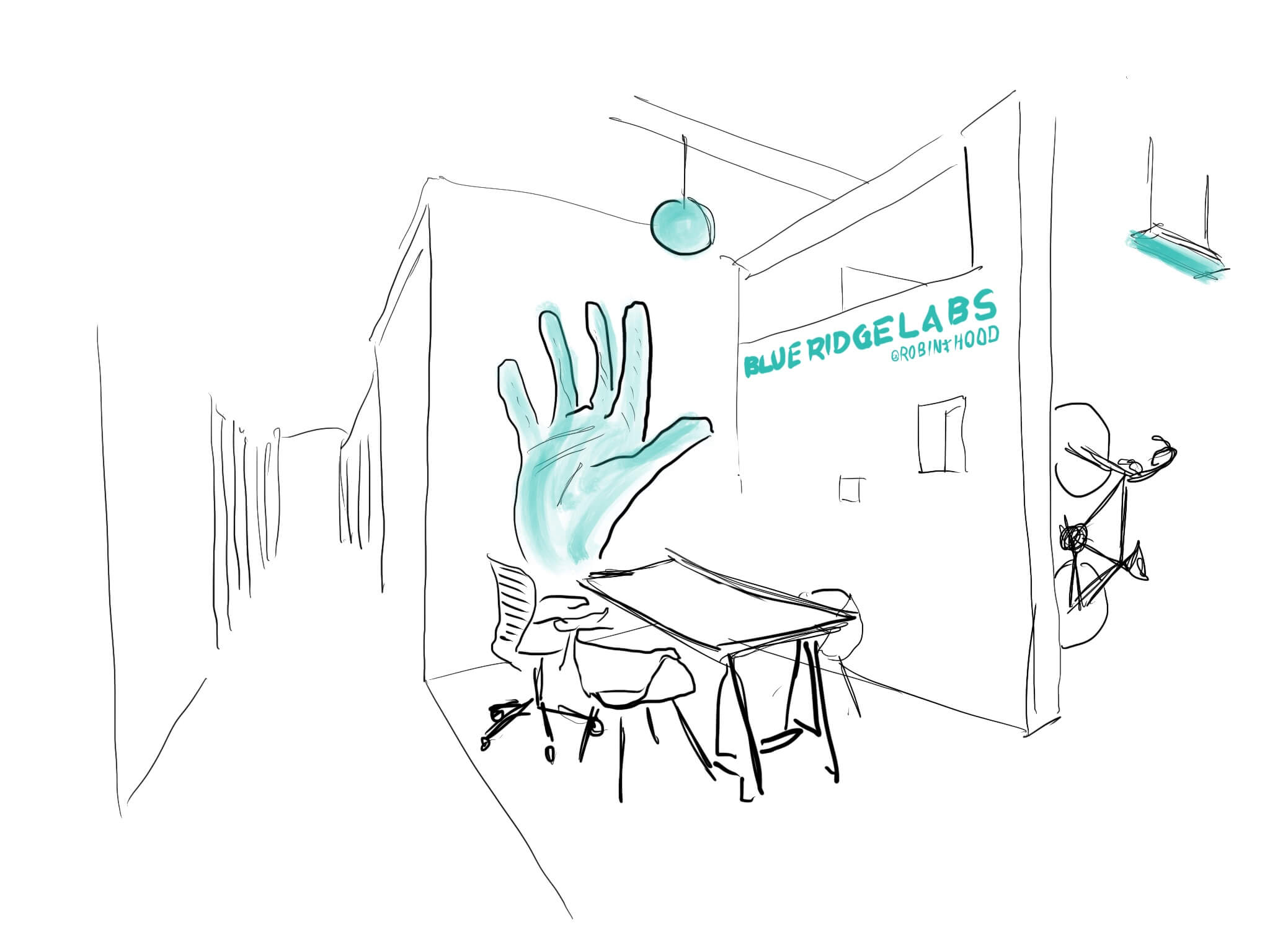 We run all of our accelerator programs like they’re products, and with each round, we improve and iterate on that product.”

Hannah Calhoon is the brains and no small amount of the energy behind the inspirational Blue Ridge Labs, a social enterprise accelerator that lives as part of the Robin Hood Foundation. Robin Hood’s mission is to fight poverty and its corollaries in New York City, and Blue Ridge fits into this by funding and catalyzing early stage ventures that fit into that story. They provided some of the early capital for Propel, which looked to tackle the accessibility and dignity surrounding foodstamps and electronic benefits transfer. They supported UpSolve, which provides a way of reclaiming financial independence for low-income Americans saddled with crippling debt. They also supported JustFix.nyc, a social venture which provides tools and technical support for the low-income housing and tenant advocacy space.

Under Hannah’s guidance, Blue Ridge Labs is one of a small number of accelerators and funding vehicles in the public interest financing space that addresses the needs of early stage technology social ventures in an effective and sustainable way. This means that they provide funding, mentorship, consulting support, and access to future funding vehicles in ways that are effectively tailored to their investees.

Perhaps most significantly, they are also able to support both for-profit and not-for-profit social enterprises. This allows them to focus on the mission of poverty alleviation in New York City, and not the means through which that mission is accomplished. Many in the philanthropic sector would argue that a for-profit corporate structure is anathema to a truly mission driven venture. But Blue Ridge Lab’s success in funding social enterprises across a variety of different corporate structures challenges this model. Part of why they’ve succeeded is in how Hannah and her team got started.

Hannah had been volunteering at the Blue Ridge Foundation when she learned that the organization would likely be wrapping up its services. Faced with the opportunity to run a pilot with some capital remaining in the fund, she had a hypothesis she wanted to test. She believed that the social sector was slipping behind private industry in its technical and product capacity, and part of this stemmed from a few realities of the philanthropic ecosystem.

With this in mind, Hannah moved forward with the proposition that perhaps things didn’t need to be that way, or at least she might surface some more of the underlying reasons why. And so she started Significance Labs with the opportunity that the Blue Ridge Foundation provided.

Significance Labs created a twelve week program that proposed going to where the entrepreneurs were, and helping build their understanding of the problem domains around poverty and equality. Taking a human-centered design approach, they worked with these entrepreneurs to embed them in the systems and with the people who they hoped to impact. Founders like Jimmy and Rohan codesigned with the people who would ultimately be using (or benefiting from) their tools. The reality is that while it’s easy to say “Go to your users,” the logistics of doing that with an at-risk population is non-trivial, and this expertise was invaluable for the entrepreneurs who engaged with Significance Labs. It gave them a first hand glimpse of how their users were living, and a context for empathy in their experience.

Following the first cohort, Hannah faced the decision of whether this was going to be a one-off, or whether it was time to create a more sustainable venture. She had written a white paper, and sent this out to a variety of stakeholders in New York’s philanthropic ecosystem. Fatefully, this included members of the Robin Hood Foundation, who had been exploring different pathways to incorporate technology innovation and design into their practice. This first contact turned into conversations that eventually turned into a trial period where Robin Hood took on the lease and operating budget for Significance Labs, which was renamed Blue Ridge Labs.

Blue Ridge Labs has a few different models for engaging the challenges of social entrepreneurship. Building from their early experiments with Significance Lab, they identified two models that seemed to create effective ventures.

The Fellowship model is one they adopted to address the pipeline of technology talent coming into the social sector. From their website, they are looking for people who “have built the skills and now want to use them to make a difference.” These fellowships are organized around specific challenges which congregate the fellows around a domain of focus, and that helps bring together the right mentorship and domain expertise to support the fellows. From the fellowships, project teams often nucleate and form into ventures that Blue Ridge can support with further funding or through connections into their funder network.

They also have their Catalyst model, which is a half-year social incubator that supports early stage ventures. This occurs after the problem and service/product have been identified, but often before acceleration. This is the opportunity to build and prototype the product itself, and start to identify a business model around it. Blue Ridge then uses this context to try and shape the right venture to emerge from the incubator: identifying the most effective corporate model, providing the right resources, and working on honing the value offering of the business so that it has the greatest impact on low income New Yorkers while also being sustainable longer term.

Blue Ridge Labs is built upon a vision for how social enterprises form in a connected and software-augmented world. Because technology entrepreneurship requires a different set of skills and capital support to succeed in delivering value to their community, a different and perhaps more flexible vision for what success means needs to be articulated. This also means that a different understanding of risk and failure need to be articulated as well.

Almost all technology ventures can be considered high risk for venture funding. Venture capital by its nature is engaged in high-risk bets on a chance for an outsized return, and face a myriad of threats to that return from team cohesion, to market competition, to regulatory hurdles, to technical failure, etc. But those risks have to be managed. When engaging with social good ventures with multiple bottom lines, the risk is compounded such that a failure might have a negative impact on the beneficiaries of that product or service.

As Hannah articulates it, “If you truly believe that the business model and the social outcomes are aligned, then you are looking at a hard company to invest in. Because if you invest and it fails, you not only risk losing the investment, but you are potentially going to negatively impact the community you were trying to help.”

With for-profit businesses, there comes the additional risk of making a decision that affects one bottom line at the expense of another. Often, when it comes down to the question of serving an underserved community at the expense of pursuing paying clients, but not being able to make salary, the company leadership will choose the solution that can help them pay their employees’ salaries.

Counterintuitively, this survival instinct is one of the risks that Blue Ridge Labs (and any other social enterprise accelerator) has to manage, especially if they are supporting for-profit social ventures. If you are investing in a business along its impact potential, but to survive as a business the impact potential has to be “set aside” to focus on revenue generating options, what do you do? Perhaps you started out as a venture that connected low income communities to emergency social services, but turn into a service that higher income communities pay for in order to report people who “don’t fit” in the community. The mechanism is the same, but one community is able to pay and the other isn’t. Unfortunately in the latter case, the profitable business model suddenly becomes one which exacerbated social injustices and profiling behavior: a direct counter to the initial social mission.

For funding entities like Blue Ridge Labs, they have to accept the risk that comes with investing in ventures that are shaped by many potentially contradictory forces. Their goal becomes being a force that shapes more and more businesses and non-profits towards an outcome that fits the public interest, and the mission of poverty alleviation at the Robin Hood Foundation.

We need more organizations like Blue Ridge across more verticals, at more stages of the venture process. If you’re at a foundation or venture capital firm, or think you might be in the right place to start something like this up, let me know! I’d love to connect you with some of the folk that I’ve spoke with in my research, to the New America Public Interest Tech program. And if you’re a social entrepreneur, technologist, and/or designer looking to create something with meaning, I’d encourage you to apply to work with Blue Ridge labs!